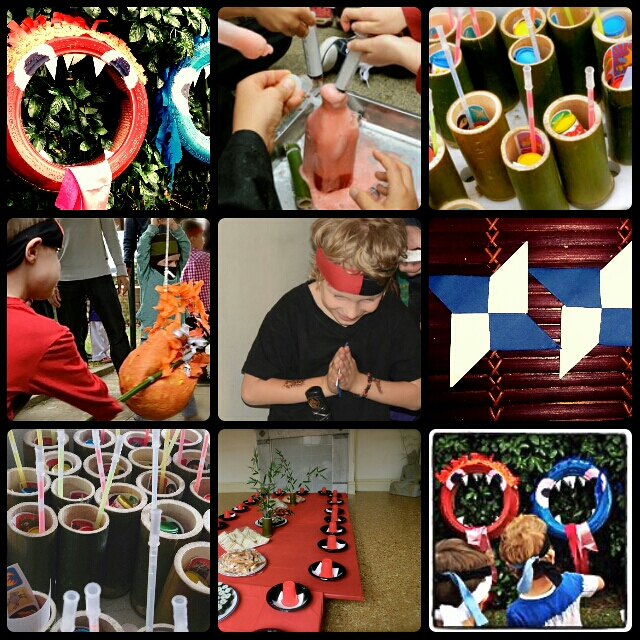 Let me set the scene. We live in a dilapidated semi with a tiny garden (dominated by a true blue Aussie hills hoist), which we needed to transform into a grand dojo for a super sneaky ninja party. Given the seething mass of small sweaty ninjas that were destined to descend upon this picture of humbledom, we decided that this party needed a RUN SHEET.

How to ninjafy your party:

10am – Ninjas creep in (some on all fours doing a superb rendition of the feline crawl).

10.15am – Ninjas gather in the front garden where Ninja Master Mama bangs ceremoniously upon the dragon gong (an enormous old tin lid decked in chinese dragonesque raffia). The ninja master uncurls a long scroll denoting the names of four Dragon Ninja teams and their students.

The gong summons their silence once more, and the young ninjas (some overcome with the forces of mad magic), hastily tuck their stars into their pockets.

10.45am – In sneaky stealth mode, the ninjas shimmer their way up the side path to where four large piles of foam blocks await them in one of the dojo’s inner chambers.

11am – Each dragon team master (a volunteer from the ninja parents army), holds a foam block out for the student, who bows to their friends, their master and then with a mighty ear-cracking shout, “kaaa-rraa-teee-CHOPS!” their foam into smithereens with the blade of their hand. Once every disciple of the art has accomplished this feat, a chosen few are asked to demonstrate multiple block chops….

A word of advice for ninja masters; holding the blocks with a forcible ‘bend’ as the student chops ensures a favourable result every time.

11.15am – The young ninja masters are gonged once more into the wild outdoors, where each team receives a great tray of coloured bottles and ground dragon bone to create their very own ninja potion. At this point, having a scientific ninja hubby becomes very useful – he has concocted the perfect combination of brightly coloured vinegar and soap to create a brew of fire, earth, water and forest-hued bubblefroth that explodes with a furious gush over the trays upon ignition by dragon bone dust.

11.30am – Ninjas wipe the bubbles from their swords and venture into the realm of swinging dragon eggs, ready to put their new karate chop techniques into practice as they take down the beastly pods of dragon doom. The simplest of pinatas, these eggs shatter from the slicing blows of the dragon teams, scattering their inner jewels onto the pavement.

11.45am – The hour has come. The ninjas have proven their worth, their might, their strength and their courage. Each bows to the friends they have made in their journey, give the gong an almighty dong and receive their black dragon ninja belt amidst the frenzied cheers of their comrades.

12pm – Leaving their weapons at the door, the ninja dragon masters enter the feasting room, where the tiny bells and drums of ancient music calls them home. They feast upon sushi, dumplings and all the treats a master of martial arts could need until the grand birthday cake arrives and they unite in song for their host, the great 6 year old Fire Dragon Master himself.

12.30pm – Our ninjas ready themselves for departure, bowing as they receive their bamboo cup of happiness (including a few little tinkerettes and tasty treats for post-party fun).

When the last ninja star was untangled from the passionfruit vine and the middens of dragon eggshells swept away, we reflected that this party was not just a celebration of one boy’s coming of an age. It was the celebration of a courageous journey made with friends.

Keep it on a shoestring tips